3D
360°
Featured Scan The World
2,728 views 401 downloads
4 collections
Community Prints Add your picture
Be the first to share a picture of this printed object
0 comments

Eros (Cupid), the god of love, was one of the most ancient Greek gods. He was especially held in high regard in the city of Thespiae in Boeotia where the god's main sanctuary was found, which was adorned with many representations of him, created by some of the most prominent sculptors of Greece, such as Praxiteles and Lysippus.

This work is a popular type, depicting the God puling his bowstring, and originates from the sculptor Lysippus who lived in the second half of the 4th Century BC. The statue itself served as a model for the Roman copy from the time of Emperor Augustus. The Greek original originates from 338-335 BC.

Here, Eros is depicted as an adolescent, whose body, though becoming a little angular, still retains a childish softness. The young god is drawing a bowstring. While his posture remains entirely natural, Lysippus created a complex spatial composition, playing parts of the figure in different intersecting planes. This imparts a special dynamism to the depiction. 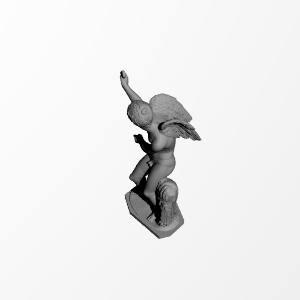