Eternal Springtime was modelled during Rodin’s intense period of activity for The Gates of Hell , but this graceful two-figure work never appeared on the portal: like The Kiss , of which it is a sort of variant, its subject evokes the happiness of two young lovers, a euphoria too inappropriate for the tragedy being played out on The Gates. With its rhythmic movement reminiscent of 18th-century decorative sculpture, which Rodin liked and had frequently imitated when working for ornamentalists, Eternal Springtime was very successful and was translated several times into bronze and marble.

The female figure of this group was based on Torso of Adèle , an earlier work modelled by Rodin and used on the tympanum of The Gates of Hell . Through its sensuality, this straining body with arched back fits into the composition perfectly. Responding to this ascending curve is the broad movement of the man, the dominant figure in this pair of lovers. 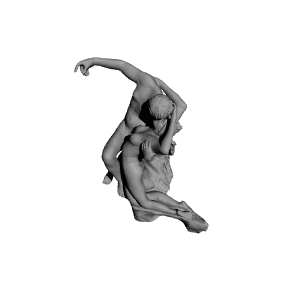