3D
Scan The World
1,597 views 68 downloads
Community Prints Add your picture
Be the first to share a picture of this printed object
0 comments

Euripides (/juːˈrɪpɪdiːz/ or /jɔːˈrɪpɪdiːz/; Greek: Εὐριπίδης; Ancient Greek: [eu̯.riː.pí.dɛːs]) (c. 480 – c. 406 BC) was a tragedian of classical Athens. Along with Aeschylus and Sophocles, he is one of the three ancient Greek tragedians for whom a significant number of plays have survived. Some ancient scholars attributed 95 plays to him but according to the Suda it was 92 at most. Of these, 18 or 19 have survived more or less complete (there has been debate about his authorship of Rhesus, largely on stylistic grounds) and there are also fragments, some substantial, of most of the other plays. More of his plays have survived intact than those of Aeschylus and Sophocles together, partly because his popularity grew as theirs declined—he became, in the Hellenistic Age, a cornerstone of ancient literary education, along with Homer, Demosthenes and Menander. 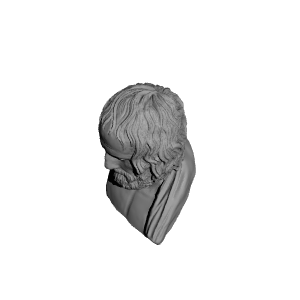 ×
0 collections where you can find Euripides by Scan The World