3D
Scan The World
6,980 views 598 downloads
4 collections
Community Prints Add your picture
Be the first to share a picture of this printed object
0 comments

This is a cast created by Alexis Rudier after Rodin, before 1941, from the original model of 1881. Assigned the the Musées nationaux by the Office des Biens et Intérets privés in 1952; it was recovered after World War II and entrusted to the Musées Nationaux.

Commissioned for Rodin in 1881, Eve was not shown until 1899. The figure's self-protective pose, the face hidden in the crook of the arm, evokes shame and the sadness of paradise lost. The cast of the sculpture has preserved the vibrancy of its unfinished modeling. 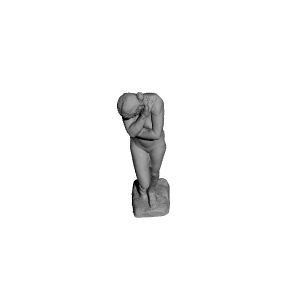 ×
4 collections where you can find Eve at The Musée Rodin, Paris by Musée Rodin