Exodus at the Middelheim Museum

3D
Scan The World
2,034 views 74 downloads
Community Prints Add your picture
Be the first to share a picture of this printed object
0 comments

Exodus at the Middelheim Museum

Yvan Theys (September 1, 1936 -  July 1, 2005 ) was a Belgian painter , draftsman, printmaker and sculptor . Along with Alphons Freymuth and Reinier Lucassen he belonged to the 1960s to the founders of the new figuration . This movement combined recognizable figuration, painted in a expressive style , with flat painted backgrounds , geometric symbols and lyrical elements. Later in the sixties he was with Roger Raveel and Raoul De Keyser and Etienne Elias seen as a representative of the "new vision" which was a more Flemish movement. In his paintings he picked up themes from world affairs, his everyday life and universal themes such as the relationship between men and women. In his work the figures in an emotional way, are often fragmentary and sometimes viewed from varying perspectives. In his later work he also reinterpreted famous works of art, including works by Pablo Picasso and Edvard Munch. He did many studies, collecting Japanese prints that enriched his work with painted wooden sculptures, assemblages and bronzes that move in a tension between figuration and abstraction.
(Credit; Wikipedia) 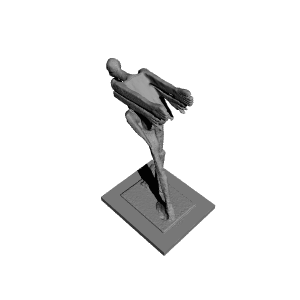