3D
360°
Scan The World
2,582 views 103 downloads
Community Prints Add your picture
Be the first to share a picture of this printed object
0 comments

One of the most important elements of an Old Kingdom tomb was the false door, so called because it reproduced elements of a typical doorway but had no opening. It marked the transition between the world of the living in front of it, and the world of the dead behind it. It was thought that the ka, or soul, of the deceased tomb owner would pass through the door to consume food and drink left by family members or friends in front. In most cases, the owner is shown partaking in such offerings on a panel over the door.

The false door of Redines was discovered in one of two niches in his mastaba tomb at Giza. Broken fragments of pottery found on a ledge in front may have been the remains of offerings. The door, together with its two outer jambs, was the only decorated element in the tomb. These elements not only provide biographical information about the owner and his family, but also show one of the very rare attempts by an Egyptian artist to depict a fully frontal figure.

From the beginning of Egyptian relief representation, artists employed a combination of profile and frontal views to reproduce the human form. A profile face with frontal eye, frontal shoulders, and profile torso and limbs showed the most characteristic elements of the figure with clarity and ease. On Redines’s false door, all the figures on the jambs and the panel above are shown in this manner. For the representation of Redines himself, centered in the doorway, however, a frontal figure is depicted, perhaps for reasons of symmetry or to create a more direct confrontation with the viewer. He appears to be emerging from the land of the dead and entering the land of the living. In the absence of an existing vocabulary to accomplish this view, the artist was forced to invent one. He adapted the hieroglyph of a frontal head and combined it with a frontal torso, and modeled the combination as if it were sculpture in the round. His greatest difficulty was with the feet, which are splayed in an unnatural pose.

The remainder of the false door was executed in a traditional manner. The inscriptions tell us that Redines was a scribe and funerary priest. He is shown seated at a table of bread loaves in the upper panel, a common pose. To the right is his young daughter and to the left, his wife. On the jambs of the door itself, the large figures are again those of Redines, wearing another wig and carrying different implements in each depiction. His two young sons are shown below.

Provenance
Giza, tomb G 5032. 1914, excavated by the Harvard University-Museum of Fine Arts Expedition, assigned to the MFA by the government of Egypt; shipped 1921.
(Accession Date: March 1, 1921) 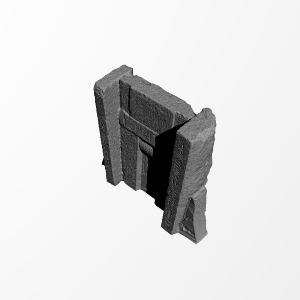