3D
Scan The World
7,731 views 512 downloads
10 collections
Community Prints Add your picture
Be the first to share a picture of this printed object
0 comments

Fantasy Bust of a Veiled Woman is one of three known examples of the same composition. Previously unrecorded, it is the best version. The others are a painted plaster in the Museum of the Second Empire at the chateau of Compiègne, France, and a partially stripped and repainted terracotta in the Carnavalet Museum, Paris. All were mold-made, but in this sculpture a few mold lines, almost as fine as human hairs, have been preserved. They are evidence of the precision and technical quality of this bust, the style of which may ultimately have been inspired by late sixteenth-century French sculptures such as Germain Pilon's renowned Virgin of Sorrows (marble example in Saint-Paul-Saint-François, Paris; terracotta in the Louvre), with its heavy veil.

At various junctures (1864 and 1870/1871 in Paris and Brussels; 1879 and 1882 at Sèvres) Carrier-Belleuse employed Auguste Rodin (1840–1917) as an assistant. It was in Carrier-Belleuse's well-organized studios that Rodin learned how to manage the large-scale workshops of his maturity. Rodin probably also gained his mastery of mold-made sculptures from Carrier-Belleuse. The similarity between the two artists was a significant consideration in the purchase of this terracotta. The similarity of the National Gallery's Bust of a Woman, 1875, by Rodin, and Fantasy Bust by Carrier-Belleuse is easy to recognize.

Over the past decade, the Gallery has acquired three large, nineteenth-century academic marble sculptures: Nydia, the Blind Girl of Pompeii by Randolph Rogers; Reading Girl by Pietro Magni; and David Triumphant by Thomas Crawford. The Fantasy Bust balances these works and, more significantly, provides a welcome link between them and Rodin. By contributing to a much-needed stylistic and historical context for the Gallery's sculptures by Rodin, the Fantasy Bust of a Veiled Woman also strengthens the chronological coherence of the collection. 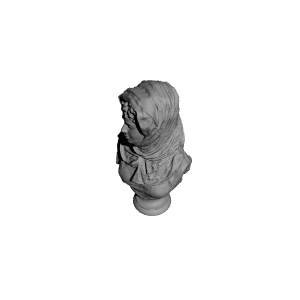 ×
10 collections where you can find Fantasy Bust of a Veiled Woman (Marguerite Bellanger?) by 3DLirious