3D
Scan The World
3,013 views 134 downloads
Community Prints Add your picture
Be the first to share a picture of this printed object
0 comments

The word "ferret" is from the Latin fur, meaning "little thief." Indeed, one of the ferret's favourite activities is stealing and hiding things. Ferret belongs to the weasel (Mustelidae) family, this group of animals also includes minks, otters, and badgers as well as polecats and sables.

They typically have brown, black, white, or mixed fur. They have an average length of 20 inches (51 cm) including a 5 inch (13 cm) tail, weight about, and have a natural lifespan of 7 to 10 years. Ferrets are sexually dimorphic predators with males being substantially larger than females.

There are several populations of feral ferrets throughout the world. The most notable and destructive population lives in New Zealand. They were initially imported from England from 1879 to 1883 to help control the rabbit population. When that population was under control, the hybrids began eating New Zealand's native bird which, until that time, had no natural predators. 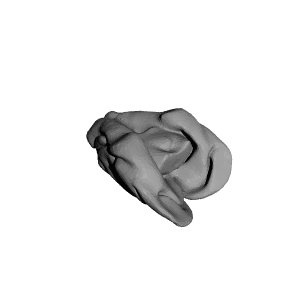