Fides in The Palace of Versailles, France

3D
Scan The World
2,451 views 140 downloads
Community Prints Add your picture
Be the first to share a picture of this printed object
0 comments

Fides in The Palace of Versailles, France

This is a marble sculpture dated 1684 and credited to sculptor Armand Lefebvre (around 1620-1700), titled la Fidélité (eng. Fideltiy or Faithfulness) depicting Fides. Fides was the goddess of trust and bona fides in Roman paganism. She was one of the original virtues (good faith) to be considered an actual religious "divinity"

Her temple on the Capitol was where the Roman Senate signed and kept state treaties with foreign countries, and where Fides protected them.

She was also worshipped under the name Fides Publica Populi Romani ("Public (or Common) Trust of the Roman People"). She is represented by a young woman crowned with an olive branch, with a cup or turtle dove, or a military ensign in hand. She wears a white veil or stola; her priests wore white cloths, showing her connection to the highest gods of Heaven, Jupiter and Dius Fidius. Her temple which can be dated to 254 B.C.E was near Jupiter's temple in the Capitol.

Traditionally Rome's second king, Numa Pompilius instituted a yearly festival devoted to Fides, and established that the major priests (the three flamines maiores) be borne to her temple in a covered arched chariot drawn by two horses. There they should conduct her services with their heads covered and right hands wrapped up to the fingers to indicate absolute devotion to her and to symbolise trust.The Greek equivalent of Fides is Pistis.

Here Fides is depicted holding a heart in her hand and accompanied by a dog lying at her feet. 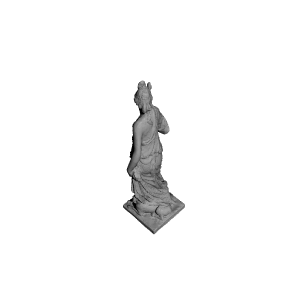 ×
0 collections where you can find Fides in The Palace of Versailles, France by Scan The World