3D
Scan The World
10,935 views 1,130 downloads
12 collections
Community Prints Add your picture
Be the first to share a picture of this printed object
0 comments

This graceful and serene sculpture depicts Guanyin, one of the most popular of all Bodhisattvas, whose name literally means 'the one who always hears sounds'. Known in China as 'the compassionate Bodhisattva', who listens to every prayer, Guanyin was often placed behind the main Buddha image in a temple. This figure was almost certainly made for a temple in Shaanxi province in northern China. Guanyin's altar surround probably took the form of a rocky grotto related to the throne of rocks he sits on. The fine carving and beautiful surface decoration lend the image its power, while the layers of pigment reveal interesting scientific and historical detail.

This carved wooden sculpture of Guanyin sits in the posture of Royal Ease on a rocky throne. The faintly feminine features are finely carved and the body corresponds to a typical Chinese body type, long in torso and short in the leg, having small, broad feet with high arches and plump hands with tapering fingers. He is invested with the fine garb of his princely status as a Bodhisattva: he wears a dhoti (a type of sarong), which is folded over at the waist and tied with a sash to form a double skirt, falling in a series of graceful folds to the feet. The Brahmanic cord is tied around his body, and a long scarf is draped over the left shoulder. On his head is the five-pointed crown, round his neck the necklace with the vajra symbol, on his arms armlets and bracelets, he has earrings in his pendant lobes and a crystal is embedded in the urna in the centre of his forehead. On his left ankle, an anklet may just be glimpsed. His hair is elaborately modelled in a high chignon, while his crown has a standing figure of the Buddha Amitabha.
The figure is made of blocks of wood, jointed together. The wood has come from a Paulownia species, the 'Foxglove Tree'. The wood was then covered with a gesso ground (of Kaolin clay bound with an animal glue) and several layers of pigments (vegetable dyes like indigo and mineral pigments). The original, naturalistic painting of the figure was completely changed during Ming dynasty restorations when it was made to look like a gilt-bronze sculpture. 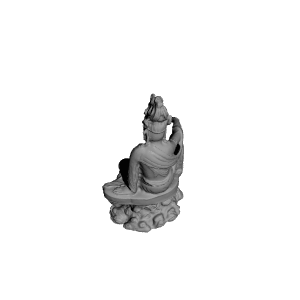 ×
12 collections where you can find Guanyin by vam