A bronze hawk statue perhaps a model of the hawk-god Horus. There are incised facial details and wings. The figure rests on a wooden platform. The bronze would have originally been highly polished and possibly overlayed with precious metal. The eye sockets are hollow to allow for an inlay of precious stone or metal.

This figure of the hawk-headed Horus, sky god and sky-hawk, was associated originally with King Chephren, builder of the Second Pyramid. Horus was the god of Northern Egypt before the two kingdoms were united. He often took on solar associations, especially when merged with sun-god Ra. Horus was associated with the Pharaoh, who was thought to be the living incarnation of Horus before uniting with Osiris, the god of the underworld, after death. Ancient Egyptian, First Dynasty, Old Kingdom. 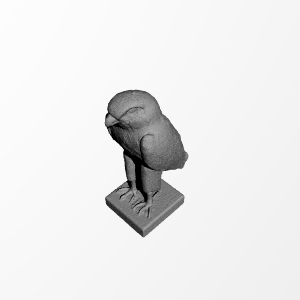 ×
8 collections where you can find Figure of Horus by HuntMuseum
×
Chris Childers
@chrischilders
1
Printed on: Creality Ender 3
Material: PLA
Posted at: 29th October 2020

Thanks added to my wall of work . Horus is about 18 inches high.