Khedrup Gelek Pelzang, 1st Panchen Lama (1385–1438 CE) – better known as Khedrup Je –  was one of the main disciples of Je Tsongkhapa, whose reforms to the Kadam tradition of Atiśa are considered the beginnings of the Gelug school of Tibetan Buddhism.

According to the legend, after Tsongkhapa died in 1419, his disciple Khedrub Jey on five occasions met with him in mystical states. Kedrub Jey is most remembered for his charisma as a teacher, as well as for the many excellent commentaries that he wrote on the tantric lineages which Tsongkhapa gathered together and elucidated. He played an important role in the education of the First Dalai Lama, who was the youngest of Tsongkhapa's five chief disciples. 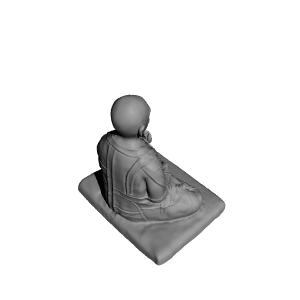 ×
2 collections where you can find First Panchen Lama at the Guimet Museum, Paris by Scan The World
×
Philippe Barreaud
@philippeb66
2
Printed on: Sindoh 3DWOX 1
Material: PLA
Posted at: 09th December 2022