3D
Scan The World
7,161 views 802 downloads
3 collections
Community Prints Add your picture
Be the first to share a picture of this printed object
0 comments

Jean Antoine Houdon, the preeminent sculptor of the French Enlightenment, was primarily known for his portraiture, a specialization that brought him fame among his contemporaries and posterity alike, despite a lack of parallel achievement on the more monumental scale. The Enlightenment virtues of truth to nature, simplicity, and grace all found sublime expression through his ability to translate into marble both a subject's personality and the vibrant essence of living flesh, their inner as well as outer life.

Three of the sculptures he made during his stay in Rome—Saint Bruno, the Ecorché, and John the Baptist—incorporate hallmarks of his later work. In particular, the Ecorché (Flayed Man), which served as the foundation for the noble figure of John the Baptist, displays Houdon's preoccupation with anatomical study. It also reveals his interest in casting and reproduction; like so many of his most popular works, he would replicate it innumerable times. But these three statues also point to a sphere of activity in which he would ultimately experience frustration: commissions for full-scale monumental sculpture, the ultimate source of fame and financial reward for professional sculptors of the era. 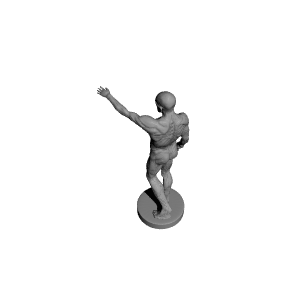 ×
3 collections where you can find Flayed Man at The Louvre, Paris by Scan The World