Very little information exists about this work of art, such as who made it, or where exactly on Vasilevsky Island, St. Petersburg, it is. The most information that can be gleaned are from the inscription on the cylindrical part, and the flag at the rear of the sculpture.

These inscriptions read “ЗА ГОГОЛЯ”, “For Gogol” on the flag, and “ТАРАС БУЛЬБА”, Taras Bulba, on the main body.

This suggests this piece was created in memory of Nikolai Gogol, writer of Taras Bulba, a romanticized historical novella. Gogol was a Russian dramatist of Ukrainian origin, his work being considered of the romantic sensibility, occasionally bordering on the surreal and grotesque. His early works took inspiration from his Ukrainian upbringing, featuring Ukrainian culture and folklore, whereas his later writing satirized the political corruption of the Russian empire.

The novella this piece is referring to, Taras Bulba, is a romanticized historical telling of the life of a Zaporozhian Coassack. The titular character Taras Bulba, and his two sons Andriy and Ostap, are the center of the tale. The original story was deemed “too Ukrainian” by Russian authorities, and Gogol rewrote the story to produce a rather different second edition which showcased far more Russian nationalist themes. 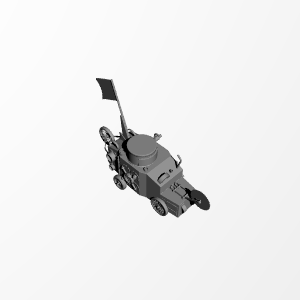