Built in baroque fashion, the fourth gate is close to the two cathedrals, on the west side of the citadel, towards the Roman’s Plateau, an ancient army practice ground. The impressive Vauban citadel structures of the 17th – 18th century warfare era, with their characteristic star shape and diamond profile bastions, are usually associated with Western Europe defence architectural tradition perfected by the great French military engineer Sébastien Le Prestre de Vauban (1633-1707). The construction is simple, with decorations only on the inner side of the gate; it housed the guards in the two lateral rooms. The passage is a semi-cylindrical tunnel, on the inner end it has a frontispiece with sculptures such as two Atlases, sculpted in the same manner of those found at the third gate, a simplified emblem of the House of Austria and various depictions of flags and war trophies bearing the marks of Carol the VIth. 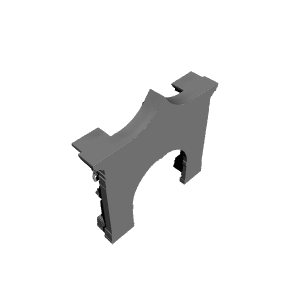 ×
28 collections where you can find Fourth Gate of Vaubam Fortress by Scan The World
×
Mark Faulder
@Heresyofus
2
Material: Resin
Posted at: 27th September 2022