3D
Scan The World
5,264 views 125 downloads
Community Prints Add your picture
Be the first to share a picture of this printed object
0 comments

Buddha Dainichi Nyorai, The Cosmic Buddha, is the central deity of Esoteric Buddhism. As opposed to the "revealed teaching", understandable to the intellect of the common man, the "concealed teaching" (mikkyō) of Esoteric Buddhism offers Buddhahood and paradise on earth to the initiate, through ritual practice and the contemplation of sacred images. According to Kūkai, the founder of the Shingon school of Esoteric Buddhism in the early ninth century, "because the secret storehouse [Mikkyō teaching] is so profound and mysterious it is difficult to manifest with brush and ink [text]. Thus it is revealed to the unenlightened by adopting the form of images. The great variety of postures and mudrās are the effect of Buddha's great compassion. With a single glance [at the images] one becomes a Buddha."

Dainichi (lit. "Great Sun") is worshipped as the supreme, primordial sun Buddha and also appears as the central figure of the Five Wisdom Buddhas. Under the syncretic doctrine of honji suijaku, the Shinto sun goddess Amaterasuwas considered a manifestation of Dainichi Nyorai. The term Nyorai (lit. "thus-come one") is an epithet for theenlightened Buddhas that occupy the highest rank in the Japanese Buddhist pantheon. In the Mandala of the Two Realms, the principle mandala for ritual activity and contemplation in Shingon Buddhism, Dainichi Nyorai appears in the centre of both the Diamond Realm and the Womb Realm. In the former, as defined by the Dainichi Sutra, Dainichi represents the "metaphysical presence that embodies reason"; in the latter, as defined by the Diamond Peak Sutra, Dainichi represents the "epistemological presence that embodies wisdom".

Unlike the other Buddhas, Dainichi Nyorai is typically depicted in the form of a boddhisattva, with the garments, adornments, and long hair of the nobility of ancient India. In this image Dainichi is bare-chested, with flowing draperies hanging from the left shoulder; the head is crowned, the arms, wrists, neck, chest, and legs bejewelled; the topknot is high, with long hair resting on the right shoulder. Dainichi Nyorai appears in two principal guises as denoted by the mudrā or ritual gesture formed by the hands, that of the Diamond Realm and that of the Womb Realm. Here the mudrā is that of the "knowledge fist" of the Diamond Realm, with the fingers of the right hand symbolizing thefive elements penetrated by the Buddhist essence as represented by the index finger of the left hand. The gesture also symbolizes the mystic union of the material with the spiritual of yoga practice, which in Tibet and Nepal takes the form of the ecstatic Yab-Yum embrace, but in China and Japan is sublimated in this mudrā.

The double round halo, one for the head attached to that for the body, represents the light emitted by the Buddha, as emphasized by the rays surrounding the lotus cushion on which the head rests. In the Brahma Net Sutra, translated into Chinese in 406 and copied and expounded on imperial orders through all the provinces in mid-eighth century Japan, Dainichi Nyorai appears seated on a lotus pedestal, around which all gather to hear his teaching of the law. Here Dainichi sits atop a six-tier lotus pedestal with alternately-arranged petals. 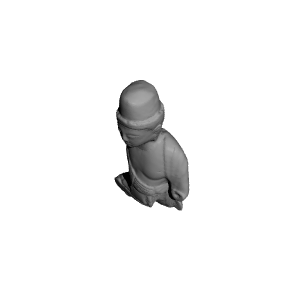