Fragment of relief with army standard

3D
Scan The World
1,506 views 33 downloads
Community Prints Add your picture
Be the first to share a picture of this printed object
0 comments

Fragment of relief with army standard

This fragment belonged to a relief with a scene of triumph, as can be deduced from the standard topped by the imperial eagle, the chained barbarian and the figure of Victory, of whom only a wing survives. Given the generic depiction of the barbarian, the work does not seem to portraiy a specific historical event but rather alludes to Roman victory over barbarism. It dates to the second half of the 2nd century AD. 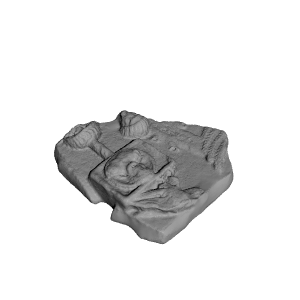