Fragment of Sarcophagus with Eros holding a Medallion

3D
Scan The World
1,175 views 34 downloads
Add to collection
1 0
Community Prints Add your picture
Be the first to share a picture of this printed object
0 comments

Fragment of Sarcophagus with Eros holding a Medallion

This relief is a fragment of Sarcophagus.

This sarcophagus is centered on the figure of Cupid holding a Medallion. It is such an interesting piece because of its sculptural technique. It illustrates Roman carvers' ever greater reliance on the drill.

Although the drill had been employed for working marble as far back as the Archaic period in Greece and was already widely used by the Early Classical period, nothing compared to the popularity it enjoyed in Roman hands, where it was used to render a wide variety of surface effects.  This depended on a fundamental change in attitude towards traces of tooling:  a willingness among Romans to advertise, rather than hide, tool marks.  This stood in marked contrast to earlier practice.  Greek sculptors had already employed the drill extensively for carving; but the Archaic and Classical ideal was a final surface devoid of any trace of tooling.  Hence sculptors of these periods took obsessive care to efface all such marks, whether of chisel or drill.  Hellenistic carvers show greater tolerance for tool marks, and extend this even to the drill, whose traces they often leave.  But it is Roman sculptors who purposefully showcase the tool, actively foregrounding its distinctive optical bite.

This flashy use of the drill for visual effects on sarcophagi seems to begin a little after the middle of the second century, in the mid-Antonine period.  Used very sparingly at first, it was gradually put to ever greater use.  By the latter part of the third century its grooves, channels, and isolated bore holes had taken over the carved surface, becoming the main means of rendering optical effects.  This was especially the case in the face and hair of figures.

As illustration of this artistic mode, consider the sarcophagus here, a piece likely carved during the reign of Constantine.  Cast your eyes on the tiny cupid perched on the shoulder of the third season from the left.  The detail shot makes things clear:  his wee face has been given ‘features’ not through any plastic modeling with the chisel, but by simply drilling six holes into his amorphous blob of a head to index the eyes, nostrils, and the corners of the mouth.

You can't help but think that this shouldn't work, because the style produces an utterly unrealistic surface.  The real human form is not, after all, pockmarked and beehived with numerous cavernous holes.  Yet this seldom strikes the viewer.  This is because the drillwork serves as highly effective visual accenting:  since the holes are used to emphasize areas where the eye is normally arrested anyway (the genitals, for example, or the eye itself), or features that the eye is normally accustomed to differentiating (such as the point near the knuckles where the fingers separate), its optical effects are often perceived as ‘naturalistic’ — especially at a distance — even though the impossible surface form that it produces is profoundly artificial. 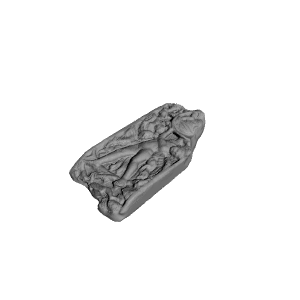