Fragment of the Athena Parthenos

3D
Scan The World
3,129 views 82 downloads
1 collection
Community Prints Add your picture
Be the first to share a picture of this printed object
0 comments

Fragment of the Athena Parthenos

Copy after the gold and ivory devotional statue erected by Phidias in the Parthenon at the end of the fifth-century BC.

Athena Parthenos (Ancient Greek: Ἀθηνᾶ Παρθένος; literally, "Athena the Virgin") is a lost massive chryselephantine (gold and ivory) sculpture of the Greek goddess Athena, made by Phidias and his assistants and housed in the Parthenon in Athens. Its epithet was an essential character of the goddess herself. A number of replicas and works inspired by it, both ancient and modern, have been made.

It was the most renowned cult image of Athens, considered one of the greatest achievements of the most acclaimed sculptor of ancient Greece. Phidias began his work around 447 BC. Lachares removed the gold sheets in 296 BC to pay his troops, and the bronze replacements for them were probably gilded thereafter; it was damaged by a fire about 165 BC but repaired. It continued to stand in the Parthenon in the 5th century AD, when it was removed by the Romans. An account mentions it in Constantinople in the 10th century. 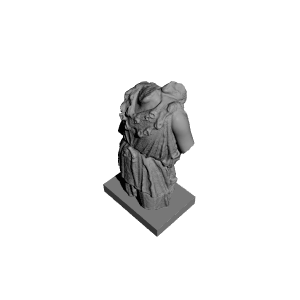