3D
Scan The World
3,777 views 239 downloads
1 collection
Community Prints Add your picture
Be the first to share a picture of this printed object
0 comments

Francesco Grimaldi (François, in French), called il Malizia ("the Cunning"), was the Genoese leader of the Guelphs who captured the Rock of Monaco on the night of 8 January 1297. He was the son of Guglielmo Grimaldi by his wife Giacobina or Giacoba, a Genoese noble.

Dressed as a Franciscan monk, Francesco was greeted at the gates ofMonaco's castle, only then to seize the castle with his cousin Rainier I, Lord ofCagnes, and a group of men behind him. The event is commemorated on theMonegasque coat of arms, on which the supporters are two monks armed with swords. He held the citadel of Monaco for four years before being chased out by the Genoese. The battle over "the rock" was taken over by his kinsmen. Francesco thus failed to establish Grimaldi's rule over Monaco, but was the first to attempt to do so.

He was married in 1295 to Aurelia del Carretto; the marriage was childless. The modern Grimaldis are therefore not descendants of Francesco. After his death, in 1309, he was succeeded by his cousin (and stepson), Rainier I, Lord of Cagnes.

His cousin's descendants, the Grimaldi family, still rule Monaco today. Over one hundred years after the coup, the Grimaldis purchased Monaco from the crown of Aragon in 1419, and became the official and undisputed rulers of "the Rock of Monaco". 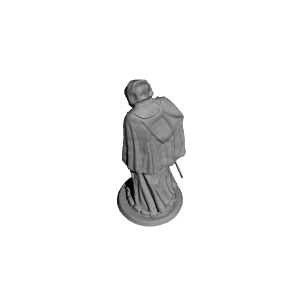