3D
Scan The World
4,783 views 140 downloads
Community Prints Add your picture
Be the first to share a picture of this printed object
0 comments

The freckled duck (Stictonetta naevosa) is a waterfowl species endemic to Australia. The freckled duck has also been referred to as the monkey duck or the oatmeal duck. These birds are usually present in mainland Australia, but disperse to coastal and subcostal wetlands in the dry period. During such times it is common for the freckled duck population to congregate in flocks in the same area, giving the impression that they are more common than they really are.

In the past few decades, several institutions have established breeding programs to aid in supplementation of the freckled duck population. Such establishments included, but are not restricted to the Hunter Wetlands Australia, Slimbridge Wetlands, Melbourne Zoo, Bronx Zoo, Adelaide Zoo, Healesville Sanctuary and Tidbinbilla Nature Reserve. The success of these institutes has been variable, with some failing to establish self-maintaining colonies.

The freckled duck has a distinctive appearance. It is characterised, in adults, by dark grey to black plumage covered with small white flecks, which gives the duck the ‘freckled’ look. The feet, legs and bill of both sexes is of a slate grey colour. Hatchlings and juveniles are distinguished by a uniform light grey plumage, which they lose around their 32nd week when they undergo a full body moult to assume the adult plumage.

The adult freckled displays a few sexual dimorphisms, the first being size. On average, males are the larger sex, with average weight between 700 - 1200g. Females have an only slightly lower range between 600 – 1200g. Both sexes have a length of 50 – 60 cm. During the breeding season particularly, the males are characterised by the base of their culmen, which takes on various shades of red. Those in prime reproductive condition take on a deep red colouring, while other males may only develop lighter shades of red, or in some instances, no colouring at all. Deep red colouring of the culmen is also associated with dominance, and those with the deepest red are those likely to breed with the females of the group. 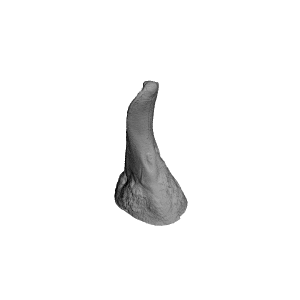 ×
0 collections where you can find Freckled duck beak by NaturalHistoryMuseum