3D
Scan The World
1,323 views 37 downloads
Community Prints Add your picture
Be the first to share a picture of this printed object
0 comments

Decorated stone sarcophagi were very common in Byzantine funerary art. It had long been a standard in Early Christian as well as pagan burial in the Mediterranean world, and this tradition was continued in medieval Byzantium, although increasingly the body of the deceased was laid to rest below the church paving. The decorated sarcophagus—without a corpse inside it—was maintained as a symbol of the body’s presence nearby, and connected this tradition with the earliest Christian burials. Sarcophagi were decorated with a wide range of motifs in relief carving, including intricate floral and vegetal forms, geometric patterns, sacred narratives, and inscriptions naming the deceased. In more rare examples, sarcophagus panels could be decorated with the ancient mythological figure of the griffin, which served as a guardian for the tomb and drew upon Byzantium’s longstanding ties to Greco-Roman art and culture. 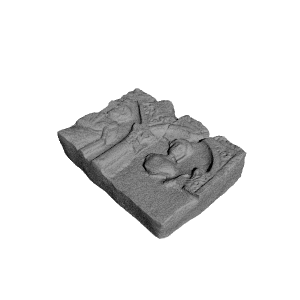