3D
Scan The World
3,073 views 102 downloads
Community Prints Add your picture
Be the first to share a picture of this printed object
0 comments

This small group which originally featured in La Porte de l'Enfer (The Gates of Hell) commissioned in 1880, was the biggest project of Rodin's life. The sculptor chose to illustrate Dante's L'Enfer (Inferno), populated by the tortured souls of the damned. He worked on it for at least twenty years without ever finishing it.
This monumental work of one hundred and eighty six figures was, for Rodin, an opportunity to create a ‘reservoir' from which he would draw for future compositions. After modelling some of his figures in clay, the sculptor would then take a plaster mould and transform them by cutting off limbs or attaching others, using fresh plaster. Thus, by enlarging them, the figures from the La Porte de l'Enfer are at the origin of Ugolin and the Penseur (The Thinker).
This technique of adding, subtracting or multiplying thus allowed Rodin to create models which were very successful commercially.

Fugit amor is formed of two bodies, a man and a woman, acrobatically clinging to each other as if being pulled by opposing, invisible forces. Originally situated in two parts of the right panel of the La Porte de l'Enfer, the group rapidly lead an independent existence. It was sometimes cast in bronze, as here, or carved in marble. Even in this size, perfectly adapted to a collector's room, the work is no less poignant in its emotional tension, symbolising the insurmountable difficulties encountered by lovers.

Difficult print. Many Supports which are also difficult to remove. Use line Support! 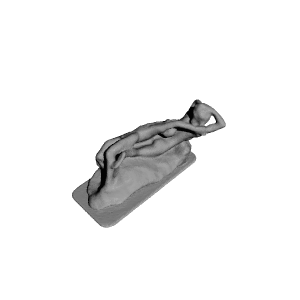 ×
0 collections where you can find Fugitive Love by Portland_3D