3D
Featured Scan The World
2,339 views 108 downloads
Community Prints Add your picture
Be the first to share a picture of this printed object
0 comments

This portrait of a former slave (Princeps) who has become a Roman citizen mimics the verist tendency typical of patrician portraits. The work adorned his tomb (columbarium). A columbarium is a building in which the urns of members of the same family or of the same professional association (which forms a collegium funeraticium) are kept in niches in the walls, evoking a dovecote, hence the name. Inscription: C (aio) Aurunceio C (ai) (and) M (arci) l (iberto) Principi / conliberti and conlibertae honoris caussa (sic) merenti (for Caius Aurunceius Princeps, freed from Caius and Marcus Aurunceius, [this portrait was raised by] his freedman and freedwoman, as a tribute because he deserved it). 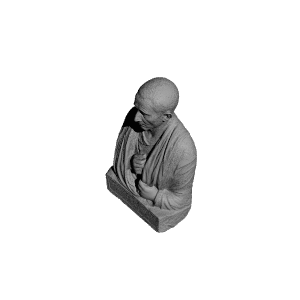 ×
0 collections where you can find Funeral bust of the freedman C. Aurunceius Princeps by geoffrey.marchal