3D
360°
Scan The World
1,728 views 101 downloads
2 collections
Community Prints Add your picture
Be the first to share a picture of this printed object
0 comments

To Claudia Toreuma of Tiberio Claudio Augusto, of nineteen years. I, Toreuma, known for my many games before I turned twenty, is buried by this land. Happily passed this short period of life, I have escaped your insult, long old age.

The monument, of rare elegance, among the most famous found in Padua, and composed of a marble cippus (1) decorated in the lower part with long acanthus leaves and flowering stems, populated by small animals: three little birds in a nest await with the beak open the food that two other birds procure by catching a dragonfly. In the upper part, under the dedication to the Gods Hands, there is a grefoil of acanthus spirals, on which stands the scroll with the name, condition and age of the deceased. In the lower part of the cippus, under the catiglio, an evocative verse inscription is engraved, the content of which refers to poetic and literary places well known in ancient culture that tended to make death in young age, to escape the horror of a long old age.
This monument reminded travelers of the young girl Toreuma, a professional juggler and mime, since she was a child, freedom of the emperor Tiberius, who grew up under Caligula and died during the empire of Claudius. Its ashes are preserved in a glass urn (3) placed inside a cylindrical limestone cyst (2), closed by a lid with two metal grapples and presumably preserved within a pedestal placed under the cippus.
The trachyte base, not relevant to the monument, was prepared in 1821 in memory of the important discovery. 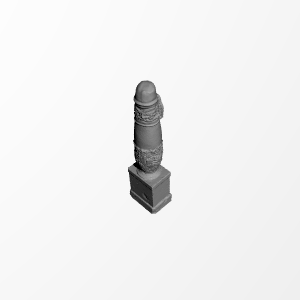