3D
360°
Featured Scan The World
1,583 views 73 downloads
Community Prints Add your picture
Be the first to share a picture of this printed object
0 comments

This relief is a type of funerary monument characteristic of the prosperous caravan city of Palmyra during the first three centuries A.D. Reliefs with a representation of the deceased and a short identifying inscription were used to seal burial niches in elaborately decorated communal tombs; those with a half-length or bust format became prevalent sometime after A.D. 65.

The relief depicts the upper body of a woman dressed in a draped garment, pinned at the left shoulder with an elaborate brooch, who faces directly towards the viewer. Her hair is covered by a turban-like headdress, made up of a wrapped cloth with a twisted border, worn over a diadem that covers her forehead. Long, wavy locks of hair fall behind her ears to her shoulders. Tiny plain rings cover the outer rims of her ears. She wears a long veil over her head which covers both arms, leaving only the hands exposed. The left hand holds a spindle and distaff, tools for spinning wool into yarn, which are associated with women’s domestic work. The right hand is held raised with the palm facing out, a gesture which may have been protective and is frequently seen on women’s funerary portraits from Palmyra. Her expression is serene, and her gaze does not meet the viewer’s but looks far into the distance. The iris and pupil of the eye are marked by incised concentric circles, and the eyebrows are indicated by modeled ridges. Her small mouth is framed by delicately modeled cheeks and chin, with the horizontal lines across the throat adding to the impression of fleshy softness. The relief can be stylistically dated to about 50-150 A.D. because of the hairstyle, and the patterned folds of the garment. An inscription which appears over her right shoulder, difficult to decipher, may have been added later. 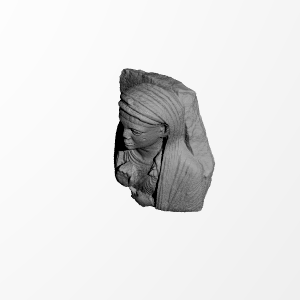 ×
0 collections where you can find Funerary relief by Janim