3D
Scan The World
2,506 views 102 downloads
Community Prints Add your picture
Be the first to share a picture of this printed object
0 comments

Grazia Deledda (27 September 1871 – 15 August 1936) was an Italian writer who received the Nobel Prize for Literature in 1926 "for her idealistically inspired writings which with plastic clarity picture the life on her native island [i.e. Sardinia] and with depth and sympathy deal with human problems in general". She was the first Italian woman to receive this honor.

The life, customs, and traditions of the Sardinian people are prominent in her writing. She relies heavily on geographical description and details and her work is most often concerned with transgressions. Many of her characters are social outcasts that struggle in silence and isolation. Deledda's whole work is based on strong facts of love, pain and death upon which rests the feeling of sin and of an inevitable fatality.

In her works we can recognize the influence of the verism of Giovanni Verga and, sometimes, also that of the decadentism by Gabriele D'Annunzio.

In Deledda's novels there is always a strong connection between places and people, feelings and environment. The environment depicted is mostly that one harsh of native Sardinia, but it is not depicted according to regional veristic schemes neither according to the otherworldly vision by D'Annunzio, but relived through the myth.

Deledda has not gained much recognition as a feminist writer potentially due to her themes of women’s pain and suffering as opposed to women’s autonomy.

Printed for PRINT3Dforum.com Some support just on the neck area and it will be fine. 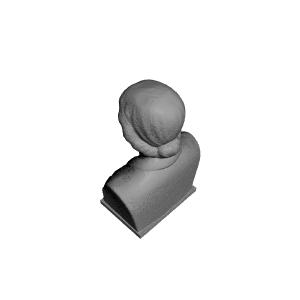 ×
0 collections where you can find Grazia Deledda at The Borghese Gardens, Rome by Scan The World