3D
360°
Scan The World
2,017 views 100 downloads
1 collection
Community Prints Add your picture
Be the first to share a picture of this printed object
0 comments

Gaddo, by Italian sculptor Torquato Della Torre (1827-1855), was modelled in Verona and transposed in marble in 1852 and has been a great success since its creation, unlike his controversial piece Orgia (also on Scan the World). One of Dante's characters, Gaddo della Gherardesca, is depicted here almost lifeless on the wooden floor of the prison where his father Ugolina, along with his brother and his nephews, also died of hunger. The sculpture had been designed the year before when he modelled a first plaster cast in Florence (now lost), the city where Della Torre had found refuge after fleeing Milan and the uprisings he had participated in. It is quite possible that the intensity of this figure is partly the result of the awful emotions the artist experienced during the violent days in Milan. 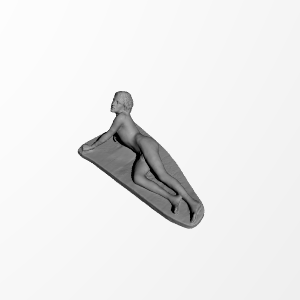 ×
1 collections where you can find Gaddo by Scan The World