This bronze sculpture depicting Mohandas Gandhi (1869–1948) was sculpted by Kantilal B. Patel (born 1925).  After its dedication on October 2, 1986, the 117th anniversary of Gandhi’s birth, the sculpture joined monuments to Washington, Lafayette, and Lincoln in Union Square Park as a quartet of works devoted to defenders of freedom.  Noted civil rights leader Bayard Rustin (1912–1987) was the keynote speaker at the dedication.

The monument, donated by the Gandhi Memorial International Foundation and underwritten by Mohan B. Murjani of Murjani International, Ltd., was installed at Union Square because of the tradition of protest associated with the park.  The champion of nonviolent protest and Indian independence from Britain, arguably one of the most important figures of the 20th century, is seen here grasping a staff in his right hand, looking towards a point on the horizon, and walking forward.  Clad in sandals and a cotton dhoti, Gandhi’s dress illustrates his Hindu asceticism as well as his support for Indian industries.  After its installation the monument became an instant pilgrimage site, with an annual ceremony taking place on Gandhi's birthday, October 2.

In 2001, Parks conserved the statue after it had been removed temporarily to facilitate the construction of a water main beneath the site. In 2002, the piece was reset on a more naturalistic stone base and the landscaped area around the monument, known as Gandhi Gardens, was expanded and improved. 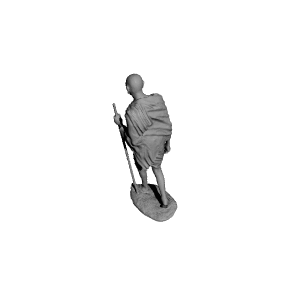