3D
Scan The World
1,610 views 68 downloads
Community Prints Add your picture
Be the first to share a picture of this printed object
0 comments

The self-taught sculptor George Wyllie (1921-2012) employed a wide variety of techniques and often staged his works as outdoor events. Most memorably 'Straw Locomotive' was suspended from the Finnieston crane on the Clyde and eventually set alight, making a dramatic statement about the decline of Glasgow's industrial heritage. Wylie's witty and playful spirit made his work accessible and popular, but his artistic purpose was a serious one. He believed that art should always ask questions - referring to his work as 'scul?ture'. Influenced by the german artist Joseph Beuys, Wyllie in turn continues to exert his influence on contemporary Scottish artists. 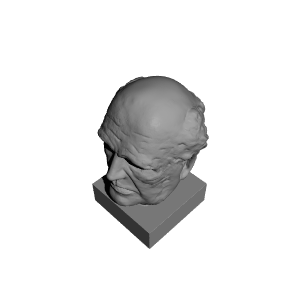