Gilliat Seized by the Octopus at The Musée des Beaux-Arts, Lyon

3D
Scan The World
2,124 views 102 downloads
Community Prints Add your picture
Be the first to share a picture of this printed object
0 comments

Gilliat Seized by the Octopus at The Musée des Beaux-Arts, Lyon

Toilers of the Sea (French: Les Travailleurs de la mer) is a novel by Victor Hugo published in 1866. The book is dedicated to the island of Guernsey, where Hugo spent 15 years in exile. Hugo uses the setting of a small island community to transmute seemingly mundane events into drama of the highest calibre. Les Travailleurs de la Mer is set just after the Napoleonic Wars and deals with the impact of the Industrial Revolution upon the island.

Gilliat is the protagonist of the book, this sculpture which Joseph Carlier created depicts the scene where he battles an octopus at sea.

Carlier exhibited this sculpture at the Salon of 1879 for which he earned second prize there. 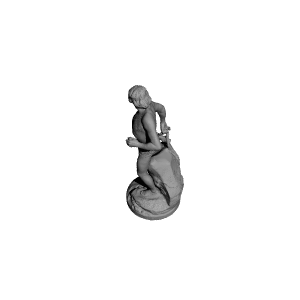 ×
0 collections where you can find Gilliat Seized by the Octopus at The Musée des Beaux-Arts, Lyon by Scan The World