3D
Scan The World
1,253 views 34 downloads
Community Prints Add your picture
Be the first to share a picture of this printed object
0 comments

Adam Fischer (28 July 1888, Copenhagen – 18 January 1968, Ordrup) was a Danish sculptor, an early contributor of works inspired by Cubism. After attending Vermehren's drawing school until 1908, Fischer studied painting at the Danish Academy (1908–1913) under Viggo Johansen but as a sulptor he was largely self-taught. From 1913 to 1933, he lived in Paris where he crafted statuettes and busts which are among the first examples of Danish sculpture inspired by Cubism. They include Ellen Fischer (walnut, 1917) and Fransk Soldat (limestone, 1918), depicting a soldier with a face made up of two halves, each with its own expression. Another early work which shows his appreciation of "the moment" is his bronze statuette Fodboldspiller (Football Player, 1915), an unusual subject for sculpture. The figure's head, arms and legs are created in two different positions, rather like a photograph taken by a camera which has moved. 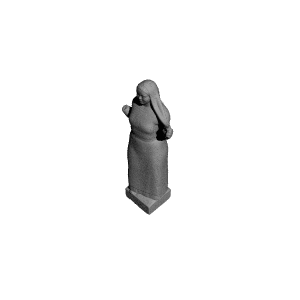