3D
Scan The World
2,082 views 116 downloads
Community Prints Add your picture
Be the first to share a picture of this printed object
0 comments

After the Russian Revolution Lebedeva took a position teaching at the Free Art Studios in Petrograd from 1918 to 1920; there she became acquainted with Vladimir Tatlin, Kazimir Malevich, and Nathan Altman, among other artists. She also entered into the local artistic milieu, becoming acquainted with intellectuals such as Maxim Gorky, Alexander Blok, Vladimir Mayakovsky, and Vsevolod Meyerkhold. She designed propaganda, producing a model for a silver ruble coin featuring an anvil and tools in 1918 and producing monuments to Georges Danton, Maximilien de Robespierre, and Alexander Herzen. From 1919 to 1920 she taught at the Stieglitz Institute in Petrograd, and in the 1920s began working in ceramics as well as producing designs for the theater. She moved to Moscow, and in 1925 she visited London. Her career as a portrait sculptor began in earnest in the same year with a portrait bust of Felix Dzerzhinsky. In 1928 she visited Paris and Berlin, and exhibited at the Venice Biennale, showing work at the latter again in 1932. In 1934 she began producing ceramic ware for the Konakovsky Factory, near which she lived, continuing until 1936; she also continued to produce portrait busts, including of Vera Mukhina, Aleksandr Tvardovsky, Aaron Soltz, Leonid Krasin, Vsevolod Ivanov, and Alexander Tsyurupa, among others. Her portrait of the pilot Valery Chkalov in the Tretyakov Gallery is “an extremely characteristic work, displaying “energetic moulding…that makes it living and dynamic.” She also produced portrait sculptures of industrial workers. A handful of figure sculptures exist as well; Lebedeva also executed designs for three monuments, none of which were ever realized. 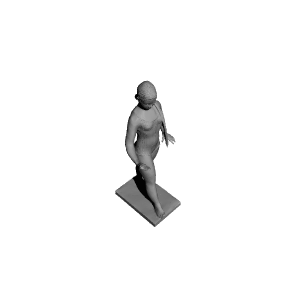