3D
Scan The World
3,264 views 102 downloads
Community Prints Add your picture
Be the first to share a picture of this printed object
0 comments

Houdon, among the greatest portraitists in history, may have met the Comte di Cagliostro through the Masonic order, of which both men were prominent members. Cagliostro's persuasive claims to extraordinary healing skills and alchemical powers won him an international following. The sculptor shows him gazing skyward, his lips parted as if in communion with the heavens, suggesting the personality that could persuade devotees of his ability to perform miraculous cures, conduct mystic Egyptian rites, and turn base metals into gold. The collar falling restlessly open was typical of portraits of artists and scholars, while the double chin and straining buttons betray a taste for the opulent life. 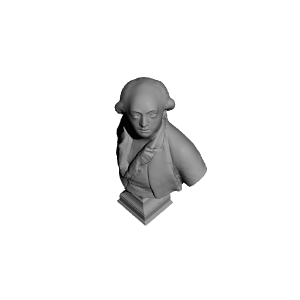 ×
0 collections where you can find Giuseppe Balsamo, "Conte di Cagliostro" by 3DLirious