3D
Scan The World
2,355 views 74 downloads
Community Prints Add your picture
Be the first to share a picture of this printed object
0 comments

Ziegler and Viaro (‘Stones of Power: Statuary and Megalithism in Nias’ in Messages in Stone: Statues and Sculptures from Tribal Indonesia in the Collection of the Barbier-Mueller Museum, Geneva, 1998) inform us that there were two types of anthropomorphic stone carvings in Central Nias. One, known as behu nio niha, was an ancestor figure associated with “feasts of merit” to mark the stages of an individual’s progression through the social ranks. A series of elaborate feasts were held, accompanied by the distribution of pig meat, and one or more stone figures would be erected for the occasion.

The other type of figure or pair of figures, called lawölö, served to protect a village. These figures were more fearsome in appearance to frighten approaching enemies.

Very little information has been recorded to help identify those rare stone figures that have survived to the present day. Ziegler and Viaro state that during their field research they found only one lawölö figure still on the island.

The present figure was described as “gowe” when exhibited in the Tribal Treasures exhibition in Delft in 1990. However according to Ziegler and Viaro this was the name given to carved monuments in North Nias, the equivalent term in Central Nias, where this figure originates, being behu nio niha, a term recorded by Schröder as early as 1908 when he visited the area.

Gowe, From Gomo´s Distric, Nias centre, Indonesia, 16 to 17 century, sculpture to acknowledge new social rank or authority of a person and improve his notoriety. Musée du Cinquantenaire (Brussels, Belgium). Made with Memento Beta. 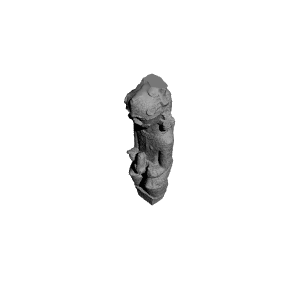 ×
0 collections where you can find Gowe figure at The Musée du Cinquantenaire, Belgium by geoffrey.marchal