Grave Stele of an Athenian Horseman

3D
Scan The World
1,488 views 82 downloads
Add to collection
5 0
Community Prints Add your picture
Be the first to share a picture of this printed object
0 comments

Grave Stele of an Athenian Horseman

Funerary stelae were large and rectangular. They were often topped by pediments that were often, although not always, supported by columns. Stelae were originally painted and in some cases adorned with metal props such as spears.The funerary stelae of Classical Greece are idealized portraits that attempt to relate the character and social position of the dead through attributes depicted on the grave marker. Examples include a warrior depicted in battle or a woman adorning herself in jewelry.The reliefs on funerary stelae followed the stylistic characteristics of the Classical period. The bodies of the men are well modeled and, if standing, they often stand with contrapposto. Drapery is often portrayed in the wet-drapery style, which allows for the form of the body to be shown.

This stele depicts a horse and two men. The utility of the Greek citizen-cavalry was low on account of their heavy armour, their metal helmet, and their coat of mail, their metal-fringed kilts, their cuisses reaching to the knee and their leather leggings. They did not take shields into battle. As offensive weapons, they had a straight two-edged sword and a spear, used either as a lance or thrown as a javelin. Horseshoes and stirrups were unknown to the Greeks. The closest approximation to a saddle was either a saddle-cloth or a piece of felt that was firmly fastened under the horse's belly. This stele depicts a horse and two men. 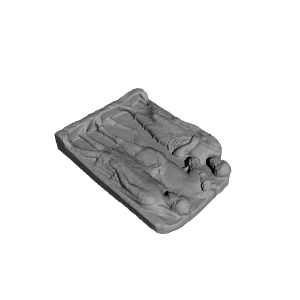