This plaster copy, acquired in 1903 (recast in 1990), is a cast of an original marble Roman grave relief from the first half of the first century, now kept in the Pergamonmuseum/Antikensammlung Berlin.

Publius Aiedius Amphio is identified by the L in the inscription as libertus or freedman of a Publius Aedius. His slave name, the Greek name Amphio, typical for Roman slaves, is retained as his last name. The name of the wife, also identified as a freed slave of Publius Aedius, was Fausta Melior. Therefore, the social position of the pair is clear. The two slaves had gained a form of Roman citizenship on receiving their freedom, but it was of a lower class only, which bound them ever more to their former owner, who was now their patron. Yet they now had the freedom, among other things, to enter into a legal marriage and children produced from such a marriage would be normal Roman citizens.

The relief emphasises this situation further. The two are depicted in an almost coldly realistic way. No sign of an intimate connection or love can be seen. Both extend their hands towards the centre of the image, showing thereby their serious union and their status as a legally married couple. The wife's finger has two rings, indicating a degree of prosperity had been achieved by the pair. The image includes so much of their bodies that it is possible to identify the clothing worn by the pair. Aiedia wears a chiton and cloak, Aiedius a Toga, which was reserved for free citizens. His age and bodily blemishes are also undisguised. Wrinkles are depicted, carved deep into their skin, just as his leathery skin and the warts on his forehead and around his mouth are. All this recalls the traditional portraits on wax deathmasks. Age and its characteristics were signs of the worth (dignitas) and excellence (virtus), with which he had worked his way out of slavery.

Today there are more than 125 reliefs of this type known. The similarity to windows, from which they get their name, is no accident. Such reliefs were placed in the walls of larger grave buildings and are often found, like windows next to doors which led into the grave building itself. The depictions "looked out" from their windows along the streets lined with tombs which led into ancient Rome. It was not unusual for freedmen to be interred in the large mausolea of their former masters. 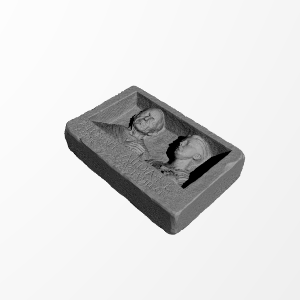 ×
2 collections where you can find Grave relief of Publius Aiedius and Aiedia by SMK - Statens Museum for Kunst
×
Dave
@dave21740
1
Printed on: Other
Material: Resin
Posted at: 26th January 2022