3D
Scan The World
1,212 views 52 downloads
Community Prints Add your picture
Be the first to share a picture of this printed object
0 comments

found near the Olympieion, Athens. The stele has the form of a naiskos with pilasters, an epistyle and a pediment with palmette akroteria. The names of three men, presumably from the same family, are inscribed on the tympanum of the pediment, the horizontal cornice, and the epistyle. The stele was originally erected to Artemidoros son of Artemidoros of Bessa, whose name is inscribed on the epistyle, with the other two names added later. The dead Artemidoros is depicted hunting a boar with his dog. The clear indication of the natural landscape is notable. The tree with the hunter's bag hanging from it and the deer in the background suggest that the scene is set in a forest. At the bottom, two goats graze under the supervision of a dog. 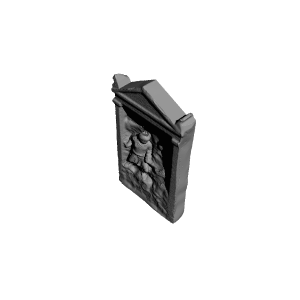