3D
Scan The World
1,009 views 50 downloads
Community Prints Add your picture
Be the first to share a picture of this printed object
0 comments

Grave stele made of Pentelic marble and found in Omonia Square, Athens.

A woman sitting on a stool extends her right hand to a standing relative, who holds it tenderly at the wrist and raises her other hand in a gesture of speech. At the left stands a girl lost in reflection. A small partridge pecks at the ground beneath the dead woman's seat. The monument, which is known as the 'stele of farewell' originally had the form of a naiskos with a pediment, pilasters and pedestal.

The work has a moving immediacy that is also found in other, smaller grave monuments, such as the lekythos inv. no. 3486. 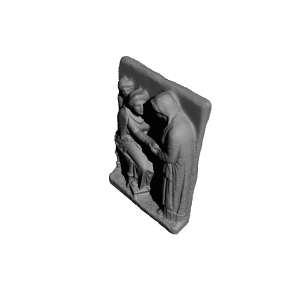