3D
Scan The World
1,840 views 68 downloads
Community Prints Add your picture
Be the first to share a picture of this printed object
0 comments

According to the Aramaic inscription, the woman portrayed here is called Abkha. It describes her as 'daughter of Akhou, descendant of Zebida, descendant of Ma'an. Alas!'. The cry of despair reflects the fact that this is a funerary monument. Abkha, the dead woman, is shown wearing heavy and elaborate jewellery. She adjusts her himation (cloak) which she wears over her headdress as a veil.

From the first century BC Palmyra grew rich from the caravan trade which linked the Gulf and the Mediterranean. The city was incorporated into the Roman Empire by the end of the first century AD. In the third century, under Queen Zenobia, Palmyrene troops took control of Syria, conquered Egypt and attempted to take Asia Minor (now Turkey). In AD 272 the Emperor Aurelian defeated the Palmyrenes, captured Zenobia and took her to Rome. Palmyra was destroyed after a second insurrection in AD 273.

Tombs were built outside the city for the wealthier citizens in the form of towers of several stories, single-storey house tombs, and underground rock-cut tombs called hypogea. They contained compartments (cubicula) set in the walls to hold the body, which was often mummified. Each cubiculum was sealed with a plaque bearing a sculptured portrait such as this. The jewellery was rarely picked out in colour, but the white appearance of the dresses is probably misleading as they were originally eichly coloured. Each had a brief dedicatory inscription. They were known as nefesh ('soul' or 'personality') and enabled the owner to exist in the next world. 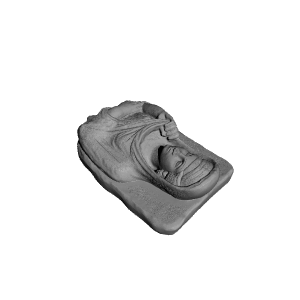