Gravestone of Stratonika, daughter of Apollonios

3D
Scan The World
1,366 views 42 downloads
Community Prints Add your picture
Be the first to share a picture of this printed object
0 comments

Gravestone of Stratonika, daughter of Apollonios

This gravestone belongs to Stratonika, her mother's namesake, who died at the age she would become a bride; she was struck down by the murderous Moira, instead of composing wedding songs, she is making a journey to Hades, sent by her fiance, Peuthes. As for me, Apollonios, the (girl's) father, o wise wayfarer, I am telling you the truth, and so the girl's mother has set up a lament for her raw anguish; just as when someone who loses a loved one is overwhelmed by grief, so also now all hte townspeople of Calchedon are in mourning." 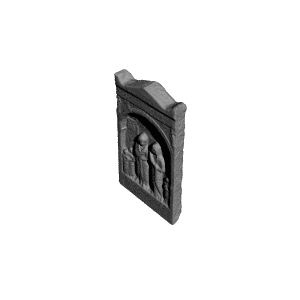 ×
0 collections where you can find Gravestone of Stratonika, daughter of Apollonios by Scan The World