3D
360°
Scan The World
2,484 views 182 downloads
2 collections
Community Prints Add your picture
Be the first to share a picture of this printed object
0 comments

This was a base of a statue. The reliefs on the four sides represent Satyrs and Maenads in symposium scenes, with reference to the world of Dionysus. The elegant decoration and the style of three of the scenes (the scene on the back side is a later addition), whose models come from Hellenistic art, are to be attributed to the Roman art of the beginning of the Augustan period (end of the 1st century BC). 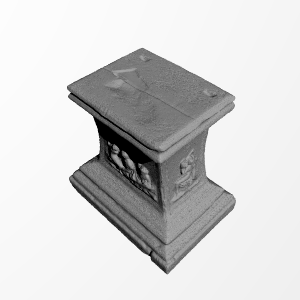