3D
Scan The World
8,965 views 539 downloads
7 collections
Community Prints Add your picture
Be the first to share a picture of this printed object
0 comments

This Guardian Lion (known as Foo Dogs or Shisa) is one of two identical sculptures which appeared in the middle of the Mojave Desert in September 2013, just off of Route 66 near Amboy, California.

There is a lot of ambiguity behind these two sculptures as nobody knows who placed them and for what purpose. With such speculation a Facebook page has been set up dedicated to researching the lions though there has not yet been a conclusion to the community's research.

Chinese guardian lions date from over 2,000 years ago, seen to be a common representation of the lion in imperial China. The concept originated from Chinese Buddhism but spread to other pasts of Asia including Japan, Korea, Tibet, Thailand, Burma, Vietnam, Sri Lanka, Nepal, Cambodia and Laos.

Since the introduction of the lion symbolism from Indian culture especially through Buddhist symbolism, statues of guardian lions have traditionally stood in front of Chinese Imperial palaces, Imperial tombs, government offices, temples, and the homes of government officials and the wealthy, from the Han Dynasty (206 BC-AD 220), and were believed to have powerful mythic protective benefits. They are also used in other artistic contexts, for example on door-knockers, and in pottery. Pairs of guardian lion statues are still common decorative and symbolic elements at the entrances to restaurants, hotels, supermarkets and other structures, with one sitting on each side of the entrance, in China and in other places around the world where the Chinese people have immigrated and settled, especially in local Chinatowns.

The lions are usually depicted in pairs. When used as statuary the pair would consist of a male leaning his paw upon an embroidered ball (in imperial contexts, representing supremacy over the world ) and a female restraining a playful cub that is on its back (representing nurture ). 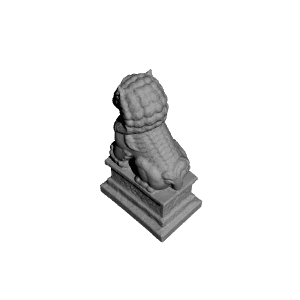