GUARDIANS OF THE GALAXY ORB CLAW

3D
3,421 views 45 downloads
Community Prints Add your picture
Be the first to share a picture of this printed object
0 comments

GUARDIANS OF THE GALAXY ORB CLAW

Hey guys, this is my first upload and i know technically i know it isnt an actual up, as of yet.

But, i dont have time to finalise the model today.

Just wanted to show peolpe what i had been working on today.

I just finished printing, finding a stone and doing the painting on tonyyoungblood on thingiverse's Orb from Guardians of the galaxy, with a remix i did using 2 Neodynium magnets cut into the outer rim, which do not effent the final look of the model ( Altered i to 3 magnets now tho ). still needs weathering and fitting the LEDs in the base.

Figured that having a stand for it would be cool, so i decided to model one side of the claw from The Collecters museum to hold the Orb.

What i have done is model the Claw so that it is a little bit more how an engineer would make it, the one in the film is held with what looks like pins!! :/ The actual weight of the orb, will press down on the assembly and actually force the arms to close on to the orb via the piston at the back.

i am almost done, just being impatient!

The part i have added is not the finished part. 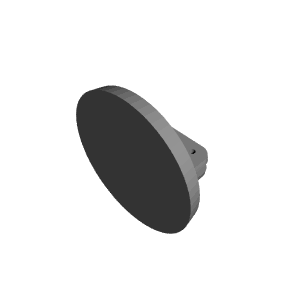