3D
Scan The World
2,324 views 158 downloads
3 collections
Community Prints Add your picture
Be the first to share a picture of this printed object
0 comments

Stylized animal motifs predominate Shang bronze decoration. The dragon, snake, cicada, ram, owl, tiger, and even elephant all make appearances. Yet these creatures were almost always less important than the taotie (composite animal) mask, which typically dominates the largest or most important register of nearly all Shang bronzes. This exquisite food bowl, an early form of the gui with looped handles that became prevalent particularly in the Western Zhou dynasty, has three such masks clearly cast in high relief encircling its cauldron. Below each mask, in the foot band, are two opposing dragons shown in profile, while four similar dragons appear above each mask in the top decorative band. The exact meaning of the taotie mask is unknown. A nine-character inscription cast on the interior bottom may stand for branches of a big clan. 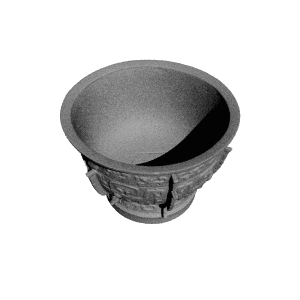 ×
3 collections where you can find Gui food vessel by artsMIA