In traditional African societies, a childless marriage is a grave problem that has serious repercussions on the relationships between wife, husband, and
in-laws and on the village as a whole. Further, childlessness seems to be the wife's problem to resolve. According to Kate Ezra (1986), women with
fertility and child-bearing problems in Bamana society affiliate with Gwan, an association that is especially concerned with such problems. Women who
avail themselves of its ministrations and who succeed in bearing children make extra sacrifices to Gwan, dedicate their children to it, and name them
after the sculptures associated with the association.

Gwan sculptures occur in groups and are normally enshrined. An ensemble includes a mother-and-child figure unlike this one, the father, and several
other male and female figures. They are considered to be extremely beautiful, that is, "things that can be looked at without limit" (ibid., 2.2.), because
they achieve the Bamana standard for sculpture: they illustrate ideals of physical beauty and ideals of character and action. The figures are brought out
of the shrine to appear in annual public ceremonies. At such times, the figures are washed and oiled and then dressed in loincloths, head ties, and
beads, all of which are contributed by the women of the village.

Sculptures depicting a seated female figure clasping an infant to her torso are called Gwandusu. The name implies such ideal attributes as
"extraordinary strength, ardent courage, intense passion and conviction as well as the ability to accomplish great deeds" (ibid., 30).
This figure has not been scientifically dated. However, a seated female figure in the Metropolitan Museum of Art that is stylistically and iconographically
similar dates at least from the seventeenth century. 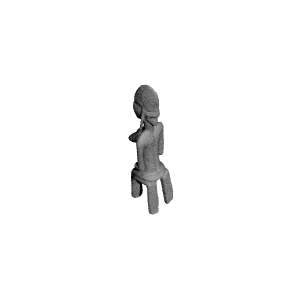