Harlequin with Mandoline in Oval

3D
360°
Scan The World
1,588 views 67 downloads
Community Prints Add your picture
Be the first to share a picture of this printed object
0 comments

Harlequin with Mandoline in Oval

Towards the end of 1922, Jacques Lipchitz was introduced to the American collector Albert C. Barnes, who commissioned him to do a series of five stone reliefs to be placed on the outer walls of his house in Marion, Pennsylvania. In 1923 Lipchitz worked on the series of high reliefs and clay trial designs for the group, part of which was Harlequin with Mandolin in Oval, an original plaster model, which was shown in the exhibition organised by Jeanne Bucher in Paris in 1930. The commission enabled the artist to go back to a line of composition involving musical instruments, reminiscent of the cubist sculptor’s earliest investigations, which Lipchitz had worked on while fully involved in the movement from 1918 to 1919. The composition of the piece is adapted to a monument format, and includes – disregarding the Cubist elimination of artistic conventions – a point-of-view perspective based on its intended location high up a wall. Lipchitz combined the human figure and the musical instrument, treating them both as objects, emphasised the contrasts of light and shadow present in bas-reliefs and integrated the curved forms into a balanced composition that follows definite rules of numerical, objective proportion, showing the sober, academic style that the language of Cubism brings with it. In the composition, the oval shape refers back to one of Analytic and Synthetic Cubism’s most used formats: a frame that negates the imposition of angles in a picture, while the thematic elements of the piece – the mandolin and the Harlequin – refer back to the limited iconography of Cubism, in an attempt to explore pictorial and sculptural space. 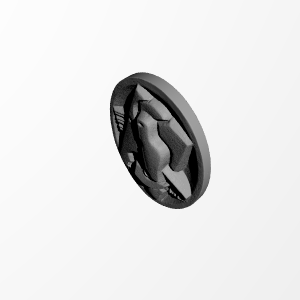