3D
Scan The World
1,419 views 53 downloads
1 collection
Community Prints Add your picture
Be the first to share a picture of this printed object
0 comments

This is one of the approximately 15 Hathoric capitals, pier-capitals or stelae which have been discovered at Amathous. They are dated between 6th and the beginning of the 5th century BC and are associated with the worship of the "Cypriot Goddess". It is type inspired by prototypes from Egyptian goddess Hathor. The characteristic head of the goddess is emerging from an umbel of papyrus and is wearing a wig ending in a curl on each side (in this example they are missing)the head is crowned with a model sanctuary (naiskos), framed by a pair of double volutes, and a winged solar disc above. From the interior of the shrine emerges the sacred serpent, the uraeus, an apotropaic symbol of a royal power. 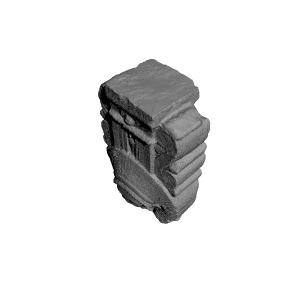