Head from the Athena Hope-Farnese

Head from the Athena Hope-Farnese

This head is a restored cast of an original full figure sculpture of The Hope Athena, a marble work from the 2nd century AD after a Greek original of the late 5th Century B.C. originating from the school of Pheidias. The cast was taken from The J. Paul Getty Museum (ORIG1116)

The Hope Athena takes its name from Thomas Hope, the former owner of the most distinguished of the copies of this type, once in the Hope collection at Deepdene, now in the Los Angeles County Museum of Art. The Hope Athena is very closely associated with the Athena Farnese in Naples, earlier than the Albani collection, and more distantly with an Athena still in the Albani collection. The Hope and Farnese Athenas are created as belonging to the same type, while the Albani Athena is shown to be diferent enough to be regarded as a separate type.

In addition to the Hope Athena, there are ten well known replicas of this statue type: four statues or fragments of statues and six heads. Their places of origin spam from Asia Minor to the Athenian Akropolis and across to Italy. It is therefore probably that the original was a celebrated and popular statue in the whole of the Mediterranean area. 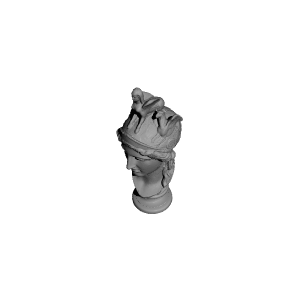