3D
Scan The World
3,300 views 216 downloads
2 collections
Community Prints Add your picture
Be the first to share a picture of this printed object
0 comments

This head of a woman dates back to the Cycladic period. The traces of eyes, in extremely low relief, indicate that they originally were rendered with pigment. The painted marble weathered less rapidly than the adjoining unpainted surfaces.The majority of these figures, however, are highly stylized representations of the female human form, typically having a flat, geometric quality which gives them a striking resemblance to today's modern art. However, this may be a modern misconception as there is evidence that the idols were originally brightly painted. A majority of the figurines are female, depicted nude, and with arms folded across the stomach, typically with the right arm held below the left. This head must have had a body but broke off. Most writers who have considered these artifacts from an anthropological or psychological viewpoint have assumed that they are representative of a Great Goddess of nature, in a tradition continuous with that of Neolithic female figures such as the Venus of Willendorf. Although some archeologists would agree, this interpretation is not generally agreed on by archeologists, among whom there is no consensus on their significance. They have been variously interpreted as idols of the gods, images of death, children's dolls, and other things. One authority feels they were "more than dolls and probably less than sacrosanct idols.

Print standing up with support touching build plate only. 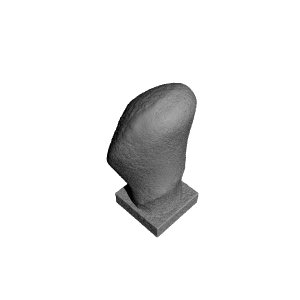